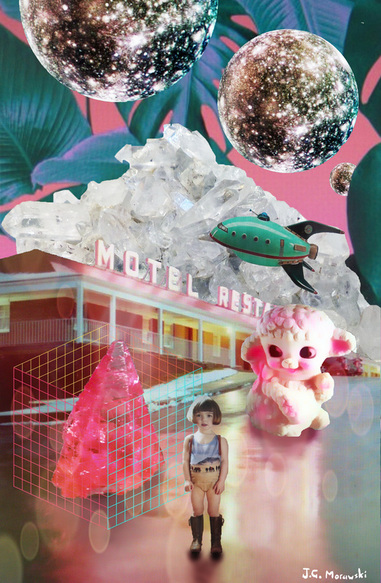 She was born in Johannesburg in 1974. As a child she moved around often, she lived not only all around South Africa but also spent  some time in Botswana and a big chunk of her childhood in Miami Florida. As an adult she has lived in both England and Japan. In Japan she was very influenced by the Japanese art and culture and you can see evidence of this in a lot of her earlier art work.

She has now settled back in South Africa and loving life on a farm in The Crags near Plettenberg Bay. Since moving back she has embraced a new style of oil painting which is about not only capturing energy but magnifying it. She paints in mostlty asymmetrical shapes done in block colours. Through these shapes she is able to achieve a sence of depth and movement, shadow and light which then translate into a fluidity leading to detail and the 'big picture'.

In her collage work she likes to play with different visual texture, as well as a mix of vintage and modern subject matter which is incongruous together but leave you with a feeling of connection that seems to kind of make sense, that feeling of understanding being personal to the viewer. She likes her work to have a visual narrative as if what you are seeing is a still frame of a surreal movie and the viewer is invited to make up the movies plot in their mind. An element of playfulness and even teasing is a recurring theme often present in these bizarre visual narratives.
All her work is produced in high resolution and is available as original, mixed media monotypes as well as signed and numbered special edition prints.

She studied advanced art and design, specialising in fine art painting at Yorkshire Coast College in Scarborough, England. She has exhibited her work in galleries in London and Hertfordshire and currently she sells her paintings in both galleries and shops on the Garden Route in South Africa as well as nationally and internationally marketed online galleries.